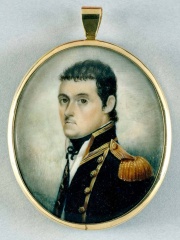 Captain Matthew Flinders (16 March 1774 – 19 July 1814) was an English navigator and cartographer who led the first inshore circumnavigation of the landmass that is now known as Australia. He is also credited as being the first person to utilise the name Australia to describe the entirety of that continent including Van Diemen's Land (now Tasmania), a title he regarded as being "more agreeable to the ear" than previous names such as Terra Australis.Flinders was involved in several voyages of discovery between 1791 and 1803, the most famous of which are the circumnavigation around Australia and an earlier expedition where he and George Bass confirmed that Van Diemen's Land was an island. While returning to England in 1803, Flinders was arrested by the French governor at Isle de France (Mauritius). Read more on Wikipedia