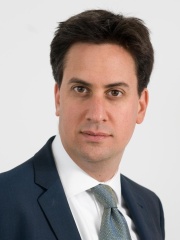 Edward Samuel Miliband (born 24 December 1969) is a British politician serving as Shadow Secretary of State for Business, Energy and Industrial Strategy since 2020, and has served as Member of Parliament (MP) for Doncaster North since 2005. He was previously Leader of the Labour Party and the Leader of the Opposition between 2010 and 2015, resigning after Labour's defeat at the 2015 general election. Alongside his brother, Foreign Secretary David Miliband, he served in the Cabinet from 2007–2010 under Prime Minister Gordon Brown. Miliband was born in the Fitzrovia district of Central London to Polish Jewish immigrants Marion Kozak and Ralph Miliband, a Marxist intellectual and native of Brussels who fled Belgium during World War II. Read more on Wikipedia

Since 2007, the English Wikipedia page of Ed Miliband has received more than 2,220,779 page views. His biography is available in 49 different languages on Wikipedia making him the 5,776th most popular politician.