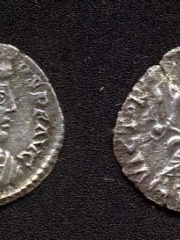 Jovinus is a Roman cognomen, most often used for a 5th-century Roman usurper emperor. This article is about the Roman usurper. For the saint, see Saint Jovinus. Read more on Wikipedia

Since 2007, the English Wikipedia page of Jovinus has received more than 50,026 page views. His biography is available in 22 different languages on Wikipedia. Jovinus is the 6,912th most popular politician (down from 5,842nd in 2019).

Page views of Jovinuses by language

Among people born in 310, Jovinus ranks 8. Before him are Ausonius, Apollinaris of Laodicea, Egeria, Antipope Eulalius, Proclus of Constantinople, and Pope Theophilus of Alexandria. After him are Gaius Marius Victorinus, Count Theodosius, Maximus of Ephesus, and Pacian. Among people deceased in 413, Jovinus ranks 5. Before him are Gwanggaeto the Great, Synesius, Kumārajīva, and Prudentius.