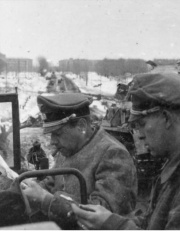 Kurt Meyer (23 December 1910 – 23 December 1961) was an SS commander and war criminal of Nazi Germany. He served in the Waffen-SS (the combat branch of the SS) and participated in the Battle of France, Operation Barbarossa, and other engagements during World War II. Meyer commanded the 12th SS Panzer Division Hitlerjugend during the Allied invasion of Normandy, and was a recipient of the Knight's Cross of the Iron Cross with Oak Leaves and Swords. After ordering the mass murder of civilians and prisoners of war (POWs) several times during the conflict, Meyer was convicted of war crimes for his role in the Ardenne Abbey massacre (the murder of Canadian POWs in Normandy). Read more on Wikipedia

Kurt Meyer is most famous for his role in the Malmedy Massacre during World War II.