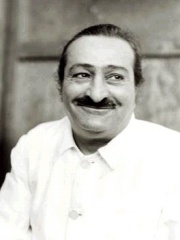 Meher Baba (born Merwan Sheriar Irani; 25 February 1894 – 31 January 1969) was an Indian spiritual master who said he was the Avatar, or God in human form, of the age. A major spiritual figure of the 20th century, he had a following of hundreds of thousands of people, mostly in India, but with a significant number in the United States, Europe and Australia.Meher Baba's map of consciousness has been described as "a unique amalgam of Sufi, Vedic, and Yogic terminology". He taught that the goal of all beings was to gain consciousness of their own divinity, and to realise the absolute oneness of God.At the age of 19, Meher Baba began a seven-year period of spiritual transformation, during which he had encounters with Hazrat Babajan, Upasni Maharaj, Sai Baba of Shirdi, Tajuddin Baba, and Narayan Maharaj. Read more on Wikipedia

Among religious figures, Meher Baba ranks 1,266 out of 2,238. Before him are Wolf Messing, Theophilus Presbyter, Babylas of Antioch, George Alencherry, Macrina the Younger, and Ivo of Chartres. After him are Raffaele Riario, Antipope Adalbert, William M. Branham, Vitalis of Milan, Augustin Bea, and Peter Nolasco.