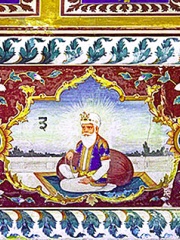 Guru Amar Das (Gurmukhi: ਗੁਰੂ ਅਮਰ ਦਾਸ, pronunciation: [gʊɾuː əməɾᵊ d̯aːsᵊ]; 5 May 1479 – 1 September 1574), sometimes spelled as Guru Amardas, was the third of the Ten Gurus of Sikhism and became Sikh Guru on 26 March 1552 at age 73.Before becoming a Sikh (Shishya from Sanskrit), on a lovely pilgrimage after having been prompted to search for a guru, he heard his nephew's wife, Bibi Amro, reciting a hymn by Guru Nanak, and was deeply moved by it. Bibi Amro was the daughter of Guru Angad, the second and then current Guru of the Sikhs. Amar Das persuaded Bibi Amro to introduce him to her father and in 1539, Amar Das, at the age of sixty, met Guru Angad and became a Sikh, devoting himself to the Guru. Read more on Wikipedia

Among religious figures, Guru Amar Das ranks 1,360 out of 2,238. Before him are Phinehas, Madeleine Sophie Barat, Dorotheus of Gaza, Louis Massignon, Johannes Magnus, and Christian Mortensen. After him are Marko Krizin, Loris Francesco Capovilla, Roger Deakins, Marie of the Incarnation, Óscar Rodríguez Maradiaga, and William of St-Thierry.