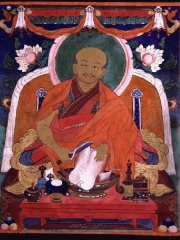 Öndör Gegeen Zanabazar (born Eshidorji) was the sixteenth Jebtsundamba Khutuktu and the first Bogd Gegeen or supreme spiritual authority, of the Gelugpa (Yellow Hat) lineage of Tibetan Buddhism in Mongolia.The son of a Mongol Tüsheet Khan, Zanabazar was declared spiritual leader of Khalkha Mongols by a convocation of nobles in 1639 when he was just four years old. The 5th Dalai Lama (1617–1682) later recognized him as the reincarnation of the Buddhist scholar Taranatha and bestowed on him the Sanskrit name Jñānavajra (Sanskrit: ज्ञानवज्र, Zanabazar in Mongolian) meaning "thunderbolt scepter of wisdom". Over the course of nearly 60 years, Zanabazar advanced the Gelugpa school of Buddhism among the Mongols, supplanting or synthesizing Sakya or "Red Hat" Buddhist traditions that had prevailed in the area, while strongly influencing social and political developments in 17th century Mongolia. Read more on Wikipedia

Page views of Zanabazars by language

Among RELIGIOUS FIGURES In Mongolia