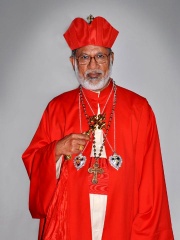 George Alencherry (Syriac: ܡܵܪܝ ܓܝܼܘܲܪܓܝܼܣ ܐܵܠܲܢܫܝܪܝ, romanized: Mar Giwargis Alencherry) is the Major Archbishop of the Syro-Malabar Catholic Church and also a cardinal of the Catholic Church. He was elected by the Holy Synod of the Syro-Malabar Church in 2011 to succeed Varkey Vithayathil (1999–2011). He was created a cardinal on 18 February 2012 by Pope Benedict XVI. Read more on Wikipedia

Among religious figures, George Alencherry ranks 1,263 out of 2,238. Before him are Oswald of Northumbria, Ilon Wikland, Amphilochius of Iconium, Wolf Messing, Theophilus Presbyter, and Babylas of Antioch. After him are Macrina the Younger, Ivo of Chartres, Meher Baba, Raffaele Riario, Antipope Adalbert, and William M. Branham.