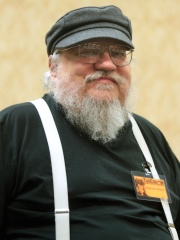 George Raymond Richard Martin (born George Raymond Martin; September 20, 1948), also known as GRRM, is an American novelist, screenwriter, television producer and short story writer. He is the author of the series of epic fantasy novels A Song of Ice and Fire, which were adapted into the Emmy Award-winning HBO series Game of Thrones (2011–2019) and its prequel series House of the Dragon (2022–present). Read more on Wikipedia

George R. R. Martin is most famous for his epic fantasy series A Song of Ice and Fire.

Among writers, George R. R. Martin ranks 509 out of 5,755. Before him are Jean Paul, Al-Maʿarri, Allen Ginsberg, Saul Bellow, Héloïse, and Marina Tsvetaeva. After him are J. M. Barrie, Rudaki, Attar of Nishapur, Henri Barbusse, Sei Shōnagon, and Natsume Sōseki.