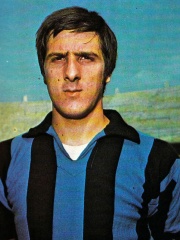 Gaetano Scirea (Italian pronunciation: [ɡaeˈtaːno ʃʃiˈrɛːa]; 25 May 1953 – 3 September 1989) was an Italian professional footballer who is considered one of the greatest defenders of his generation and one of the greatest defenders of all time. He spent most of his career with Juventus F.C.Scirea is one of only six players in European football history to have won all international trophies for football clubs recognized by UEFA and FIFA. Scirea is also one of only nine players in the history of European football that won all three major UEFA football competitions, a feat he managed while playing with Juventus, the Italian club with which he spent the majority of his career, aside from two seasons with Atalanta. At international level, he played for the Italy national team for more than a decade, during which he was an undisputed member of Italy's defensive line-up, keeping Franco Baresi out of the national team for four years, until he retired in 1986. Read more on Wikipedia