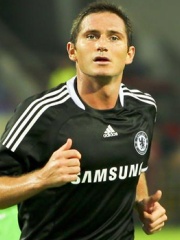 Frank James Lampard (born 20 June 1978) is an English professional football manager and former player who is the head coach of Premier League club Chelsea. As a player, he is widely considered to be one of Chelsea's greatest ever players, and one of the greatest midfielders of his generation. A creative and technically gifted box-to-box midfielder, Lampard began his career in 1995 at West Ham United, the club where his father, Frank Lampard Sr., also played. Read more on Wikipedia

Since 2007, the English Wikipedia page of Frank Lampard has received more than 8,250,886 page views. His biography is available in 84 different languages on Wikipedia making him the 312th most popular soccer player.