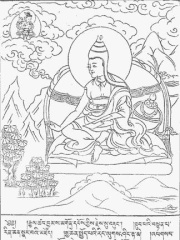 Asaṅga (Tibetan: ཐོགས་མེད།, Wylie: thogs med, traditional Chinese: 無著; ; pinyin: Wúzhuó; Romaji: Mujaku) (fl. 4th century C.E.) was "one of the most important spiritual figures" of Mahayana Buddhism and the "founder of the Yogachara school". He is known as one of the seventeen Nalanda masters and taught at the monastery which is located in modern-day Bihar. Read more on Wikipedia

He was a Buddhist monk who was the founder of the Yogacara school of Mahayana Buddhism. He is most famous for his theory of ālayavijñāna, which is a theory that says that the world is created by the mind and that the world is an illusion.

Page views of Asangas by language

Among philosophers, Asanga ranks 328 out of 1,089. Before him are Vyasa, Wang Yangming, Justus Lipsius, Arnaldus de Villa Nova, Martianus Capella, and Heraclides Ponticus. After him are Jacques Rancière, Henri Lefebvre, Bruno Latour, Hermann Cohen, Crates of Thebes, and Pietro Pomponazzi.

Among people born in 300, Asanga ranks 15. Before him are Vincent of Saragossa, Vātsyāyana, Valerius Severus, Macarius of Egypt, Volusianus, and Erasmus of Formia. After him are Narseh, Expeditus, Cyriacus, Victorinus, Hormizd II, and Bahram III. Among people deceased in 301, Asanga ranks 1. After him are Maurus Servius Honoratus, Rutilius Taurus Aemilianus Palladius, and Julius Obsequens.

Among PHILOSOPHERS In Pakistan

Among philosophers born in Pakistan, Asanga ranks 2. Before him are Chanakya (-375).