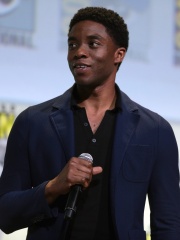 Chadwick Aaron Boseman (born November 29, 1976, or in 1977) (sources differ on date) is an American actor known for his portrayals of real-life historical figures such as Jackie Robinson in 42 (2013), James Brown in Get on Up (2014) and Thurgood Marshall in Marshall (2017), and for his portrayal of the superhero Black Panther in the Marvel Cinematic Universe films Captain America: Civil War (2016), Black Panther (2018), Avengers: Infinity War (2018), Avengers: Endgame (2019). Read more on Wikipedia

Since 2007, the English Wikipedia page of Chadwick Boseman has received more than 12,589,092 page views. His biography is available in 42 different languages on Wikipedia making him the 2,660th most popular actor.