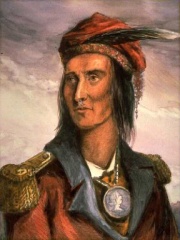 Tecumseh ( ti-KUM-sə, ti-KUM-see; March 1768 – October 5, 1813) was a Native American Shawnee warrior and chief, who became the primary leader of a large, multi-tribal confederacy in the early 19th century. Born in the Ohio Country (present-day Ohio), and growing up during the American Revolutionary War and the Northwest Indian War, Tecumseh was exposed to warfare and envisioned the establishment of an independent Native American nation east of the Mississippi River under British protection. He worked to recruit additional members to his tribal confederacy from the southern United States.Tecumseh was among the most celebrated Native American leaders in history and was known as a strong and eloquent orator who promoted tribal unity. Read more on Wikipedia

Since 2007, the English Wikipedia page of Tecumseh has received more than 2,278,158 page views. His biography is available in 40 different languages on Wikipedia making him the 3,903rd most popular politician.

Page views of Tecumsehs by language

Among politicians, Tecumseh ranks 3,880 out of 14,801. Before him are Isser Harel, Omar Torrijos, Shvarn, Maurice Thorez, Bořivoj I, Duke of Bohemia, and Yuan Chonghuan. After him are Isabella of Valois, Everard des Barres, Richard of Shrewsbury, Duke of York, Clovis III, Ramiro II of León, and Luigi Einaudi.