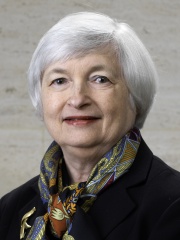 Janet Louise Yellen (born August 13, 1946) is an American economist serving as the 78th United States Secretary of the Treasury since January 26, 2021. She previously served as the 15th chair of the Federal Reserve from 2014 to 2018. She is the first person to hold those positions having also led the White House Council of Economic Advisers and the first woman to hold either post. Born and raised in Bay Ridge, Brooklyn, Yellen graduated from Brown University in 1967 and earned a Ph.D. Read more on Wikipedia

Among politicians, Janet Yellen ranks 4,616 out of 15,577. Before her are Gabriel Bonnot de Mably, Charles III Philip, Elector Palatine, Fruela I of Asturias, Wallace Fard Muhammad, Christian I, Elector of Saxony, and Nicholas J. Spykman. After her are Kersti Kaljulaid, Louis I, Count of Flanders, Khabul Khan, Franz Ritter von Epp, Peter II of Sicily, and Sahib I Giray.