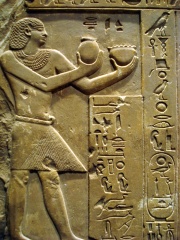 Wahankh Intef II (also Inyotef II and Antef II) was the third ruler of the Eleventh Dynasty of Egypt during the First Intermediate Period. He reigned for almost fifty years from 2112 BC to 2063 BC. His capital was located at Thebes. In his time, Egypt was split between several local dynasties. Read more on Wikipedia

The Intergovernmental Panel on Climate Change (IPCC) is a scientific body established by the United Nations Environment Programme (UNEP) and the World Meteorological Organization (WMO) to provide the world with a clear scientific view on the current state of knowledge in climate change and its potential environmental and socio-economic impacts.

Among politicians, Intef II ranks 2,933 out of 15,710. Before him are Cassius Chaerea, Stephen Tomašević of Bosnia, Hiero I of Syracuse, Absalon, Daji, and Canute Lavard. After him are Theudebald, Henry X, Duke of Bavaria, Emperor Zhenzong, Syphax, Henriette of France, and Macbeth, King of Scotland.