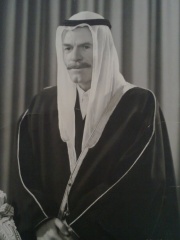 Izzat Ibrahim al-Douri (Arabic: عزة إبراهيم الدوري, romanized: Izzat Ibrāhīm ad-Dūrī; 1 July 1942 – 25 October 2020) was an Iraqi politician and Army Field Marshal. He served as Vice Chairman of the Iraqi Revolutionary Command Council until the 2003 U.S.-led invasion of Iraq and was regarded as the closest advisor and deputy under President Saddam Hussein. He led the Iraqi insurgent Naqshbandi Army.Al-Douri was the most high-profile Ba'athist official to successfully evade capture after the 2003 invasion of Iraq, and was the king of clubs in the infamous most-wanted Iraqi playing cards. Read more on Wikipedia

Among politicians, Izzat Ibrahim al-Douri ranks 3,578 out of 15,577. Before him are Hiero I of Syracuse, Blaise Compaoré, Maria Leopoldine of Austria, Phocion, Imagawa Yoshimoto, and Mozaffar ad-Din Shah Qajar. After him are Emperor Wenzong of Tang, Onjo of Baekje, Aristagoras, Mundzuk, Claudia Felicitas of Austria, and Bettino Craxi.