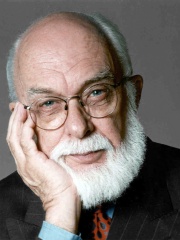 James Randi (born Randall James Hamilton Zwinge; August 7, 1928 – October 20, 2020) was a Canadian-American stage magician , author and scientific skeptic who extensively challenged paranormal and pseudoscientific claims. He was the co-founder of the Committee for Skeptical Inquiry (CSI), and founder of the James Randi Educational Foundation (JREF). Randi began his career as a magician under the stage name The Amazing Randi and later chose to devote most of his time to investigating paranormal, occult, and supernatural claims, which he collectively called "woo-woo". Read more on Wikipedia

James Randi is most famous for his work as a magician, escape artist, and skeptic. He has debunked many psychics, faith healers, and other frauds.

Among magicians, James Randi ranks 5 out of 11. Before him are Harry Houdini, David Copperfield, Uri Geller, and Jean Eugène Robert-Houdin. After him are David Blaine, Criss Angel, Ricky Jay, Penn Jillette, Dynamo, and Derren Brown.

Among MAGICIANS In Canada