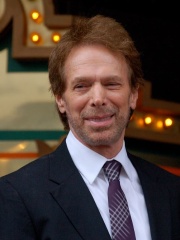 Jerome Leon Bruckheimer (born September 21, 1943) is an American film and television producer. He has been active in the genres of action, drama, fantasy, and science fiction. His films include Flashdance, Top Gun, The Rock, Crimson Tide, Con Air, Armageddon, Enemy of the State, Black Hawk Down, Pearl Harbor, Kangaroo Jack, and the Beverly Hills Cop, Bad Boys, Pirates of the Caribbean, and the National Treasure franchises. Read more on Wikipedia

Jerry Bruckheimer is most famous for producing big-budget Hollywood films, such as Top Gun, Beverly Hills Cop, Pirates of the Caribbean, and The Rock.