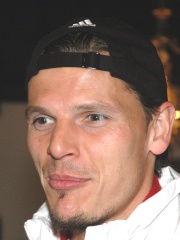 Daniel Van Buyten (Dutch pronunciation: [ˈdaːnijɛl vɑm ˈbœytə(n)]; born 7 February 1978) is a Belgian former footballer who played as a centre back. Nicknamed "Big Dan", Van Buyten was known for his uncompromising style of play, exploiting both his physical strength and aerial ability. Beginning at Charleroi as a striker, Van Buyten's career took off when he converted to a centre back, playing for a series of top flight clubs, including Marseille, Manchester City, Hamburger SV and Bayern Munich. Read more on Wikipedia

Since 2007, the English Wikipedia page of Daniel Van Buyten has received more than 340,677 page views. His biography is available in 46 different languages on Wikipedia making him the 1,274th most popular soccer player.