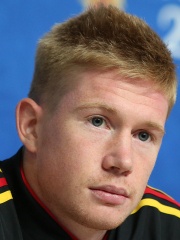 Kevin De Bruyne (Dutch pronunciation: [ˈkɛvɪn də ˈbrœynə]; born 28 June 1991) is a Belgian professional footballer who plays as a midfielder for Premier League club Manchester City, where he is vice-captain, and the Belgian national team. Recognized for his exceptional passing, shooting ability and dribbling, he is widely considered to be one of the best players in the world and has often been described as a "complete" footballer. De Bruyne began his career at Genk, where he was a regular player when they won the 2010–11 Belgian Pro League. Read more on Wikipedia

Since 2007, the English Wikipedia page of Kevin De Bruyne has received more than 6,984,644 page views. His biography is available in 64 different languages on Wikipedia making him the 1,558th most popular soccer player.