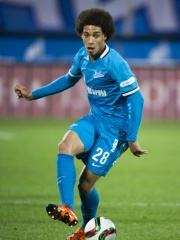 Axel Laurent Angel Lambert Witsel (born 12 January 1989) is a Belgian professional footballer who plays for German club Borussia Dortmund. During his play for the Belgium national team, he came into the first team as a right-winger, and can also play attacking midfielder, though his natural position is as a central midfielder. He began his career at hometown club Standard Liège, making 183 appearances and scoring 42 goals while winning five domestic trophies. Read more on Wikipedia

Since 2007, the English Wikipedia page of Axel Witsel has received more than 2,070,758 page views. His biography is available in 48 different languages on Wikipedia making him the 1,181st most popular soccer player.