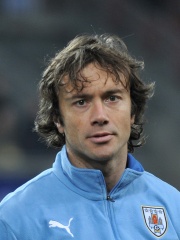 Diego Alfredo Lugano Morena (Spanish pronunciation: [ˈdjeɣo luˈɣano]; (born 2 November 1980) is a Uruguayan former professional footballer who played as a central defender. Nicknamed Tota, Lugano played for a number of clubs in South America and Europe, including Plaza Colonia, Club Nacional de Football, São Paulo, Fenerbahçe, Paris Saint-Germain, Malaga and West Bromwich Albion, before finishing his career with a second spell at Brazilian club São Paulo, where he now works as an administrator. Throughout his career, Lugano netted goals in the football leagues of Uruguay, Brazil, Turkey, England, France and Paraguay.In 2015, Paraguayan newspaper ExtraPRESS named Lugano one of the most expensive player in Paraguay, and he was also awarded by Diario Popular as the most popular player in Paraguayan football.Lugano made 95 appearances for the Uruguay national team, captaining his country at two FIFA World Cups. Read more on Wikipedia