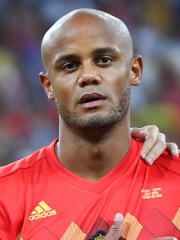 Vincent Jean Mpoy Kompany (French pronunciation: ​[vɛ̃sɑ̃ kɔ̃pani]; Dutch pronunciation: [vɪnsɛnt kɔmpani]; born 10 April 1986) is a Belgian retired professional footballer who played as a centre back and is currently the manager of Belgian club RSC Anderlecht. He also played for the Belgium national team. Kompany began his professional career at Anderlecht; having graduated from their youth system, he was with the club for three seasons as a first team player before moving to Bundesliga club Hamburg in 2006. Read more on Wikipedia

Since 2007, the English Wikipedia page of Vincent Kompany has received more than 3,527,170 page views. His biography is available in 55 different languages on Wikipedia making him the 1,236th most popular soccer player.