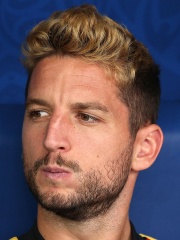 Dries Mertens (Dutch pronunciation: [ˈdris ˈmɛrtəns], born 6 May 1987), nicknamed "Ciro", is a Belgian professional footballer who plays as a striker or winger for Serie A club Napoli and the Belgium national team.As a youth, Mertens played for Stade Leuven, Anderlecht and Gent, and made his debut on loan to Eendracht Aalst in the Belgian Third Division. In 2006, he moved to Dutch Eerste Divisie club AGOVV Apeldoorn, where he spent three years before a €600,000 move to Utrecht of the Eredivisie. Two years later he and teammate Kevin Strootman were transferred to PSV Eindhoven for a combined fee of €13 million, and won the KNVB Cup and Johan Cruyff Shield in 2012. Read more on Wikipedia