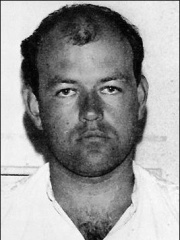 Colin Pitchfork is a British double child-murderer and rapist. He was the first person convicted of rape and murder using DNA profiling after he murdered two girls in neighbouring Leicestershire villages, the first in Narborough, in November 1983, and the second in Enderby in July 1986. He was arrested on 19 September 1987 and was sentenced to life imprisonment on 22 January 1988 after pleading guilty to both murders, with the judge giving him a 30-year minimum term (only for Pitchfork to challenge the minimum term and see it reduced to 28 years on appeal). Read more on Wikipedia