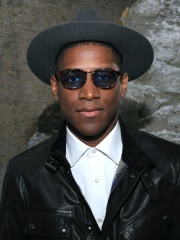 Timothy Lee McKenzie (born 4 January 1989), better known by his stage name Labrinth, is a British singer, songwriter, rapper and record producer. After initially pursuing a career in music production, Simon Cowell signed him to his record label Syco Music as a recording artist, after which Labrinth became the first singer who Cowell signed without having competed on a talent show in six years. He has been referred to as “one of the most important British musicians of his generation.”Labrinth made his debut appearance on the UK Singles Chart in March 2010, when his collaboration with English rapper Tinie Tempah, "Pass Out", reached number one. Read more on Wikipedia

Page views of Labrinths by language

Among singers, Labrinth ranks 3,155 out of 3,541. Before him are Mélanie René, Max Jason Mai, Polina Smolova, ManuElla, Ayaka Nishiwaki, and Nodiko Tatishvili. After him are Jana Burčeska, Andy McKee, Annie, Abraham Mateo, Kenza Farah, and Sisqó.