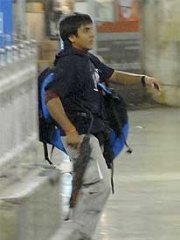 Mohammed Ajmal Amir Kasab (Urdu: محمد اجمل امیر قصاب‎) ‎; 13 July 1987 – 21 November 2012) was a Pakistani militant and a member of the Lashkar-e-Taiba Islamist militant organisation, through which he took part in the 2008 Mumbai terrorist attacks in Maharashtra state of India. Kasab, alongside fellow Lashkar-e-Taiba recruit Ismail Khan, killed 72 people during the attacks, most of them at the Chhatrapati Shivaji Terminus. Read more on Wikipedia

Since 2007, the English Wikipedia page of Ajmal Kasab has received more than 2,537,832 page views. His biography is available in 23 different languages on Wikipedia making him the 176th most popular extremist.

Among EXTREMISTS In Pakistan

Among extremists born in Pakistan, Ajmal Kasab ranks 3. Before him are Khalid Sheikh Mohammed (1964) and Baitullah Mehsud (1974). After him are Hakimullah Mehsud (1979).