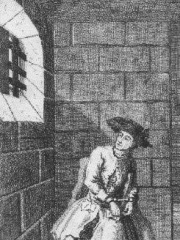 Jonathan Wild, also spelled Wilde (1682 or 1683 – 24 May 1725), was a London underworld figure notable for operating on both sides of the law, posing as a public-spirited crimefighter entitled the "Thief-Taker General". Wild simultaneously ran a significant criminal empire, and used his crime fighting role to remove rivals and launder the proceeds of his own crimes. Wild exploited a strong public demand for action during a major London 18th-century crime wave in the absence of any effective police force. Read more on Wikipedia

Among people born in 1683, Jonathan Wild ranks 17. Before him are Christoph Graupner, Johann David Heinichen, Burkhard Christoph von Münnich, Gottfried Silbermann, Christian Ludwig II, Duke of Mecklenburg-Schwerin, and Lorenz Heister. After him is Mark Catesby. Among people deceased in 1725, Jonathan Wild ranks 6. Before him are Peter the Great, Alessandro Scarlatti, Chikamatsu Monzaemon, Mahmud Hotak, and Arai Hakuseki. After him are José Benito de Churriguera and Sulkhan-Saba Orbeliani.