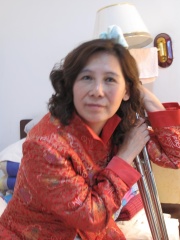 Ni Yulan (倪玉兰, born 24 March 1960) is a civil rights lawyer in the People's Republic of China. She holds a law degree from China University of Political Science and Law, and officially became a lawyer law in 1986. Ni has established herself in the field of human rights lawyering by defending persecuted groups such as Falun Gong practitioners and victims of forced eviction.Ni's human rights activism began in 2001 when her neighborhood in Beijing had been slated for mandatory demolition in order to accommodate the 7-year-later 2008 Beijing Olympics. Read more on Wikipedia

Since 2007, the English Wikipedia page of Ni Yulan has received more than 25,187 page views. Her biography is available in 16 different languages on Wikipedia. Ni Yulan is the 481st most popular social activist, the 868th most popular biography from China and the 14th most popular Chinese Social Activist.