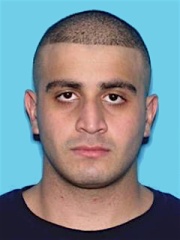 Omar Mir Seddique (November 16, 1986 – June 12, 2016), also known as Omar Mateen, was an American mass murderer and domestic terrorist who killed 49 people and wounded 53 others in a mass shooting at the Pulse nightclub in Orlando, Florida, on June 12, 2016, before he was killed in a shootout with the local police. It was the deadliest shooting by a single shooter in United States history until the Las Vegas Strip shooting on October 1, 2017. Before the shooting, he had been investigated for connections to terrorism by the Federal Bureau of Investigation (FBI) in 2013 and 2014. Read more on Wikipedia

Since 2007, the English Wikipedia page of Omar Mateen has received more than 2,454,080 page views. His biography is available in 19 different languages on Wikipedia making him the 181st most popular extremist.

Among extremists, Omar Mateen ranks 180 out of 182. Before him are Wail al-Shehri, Colin Pitchfork, Tommy Robinson, Luka Magnotta, Hakimullah Mehsud, and Jared Fogle. After him are James Holmes.