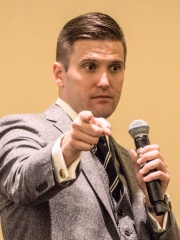 Richard Bertrand Spencer (born 1978) is an American neo-Nazi, antisemitic conspiracy theorist and white supremacist who is known for his activism on behalf of the alt-right movement in 2016 and 2017. Spencer calls for the reconstitution of the European Union into a white racial empire, which he believes will replace the diverse European ethnic identities with one homogeneous "white identity". The majority of European nations have banned Spencer and denounced his call for white racial empire. Read more on Wikipedia

Page views of Richard B. Spencers by language

Among journalists, Richard B. Spencer ranks 125 out of 129. Before him are Lise Rønne, Vicky Ntetema, Timur Miroshnychenko, Rémi Ochlik, Natalia Morar, and Mohammed Nabbous. After him are A. O. Scott, Steven Crowder, Lauren Southern, and Peter Travers.