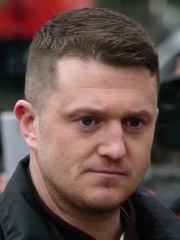 Stephen Christopher Yaxley-Lennon (born 27 November 1982), known as Tommy Robinson, is a British far-right and anti-Islam activist. He is the co-founder and former leader of the English Defence League, and later served as a political advisor to former UKIP leader Gerard Batten.Robinson has been active in far-right politics for many years. He was a member of the neo-fascist and white nationalist British National Party (BNP) from 2004 to 2005. Read more on Wikipedia

Since 2007, the English Wikipedia page of Tommy Robinson has received more than 70,588 page views. Her biography is available in 17 different languages on Wikipedia making her the 178th most popular extremist.