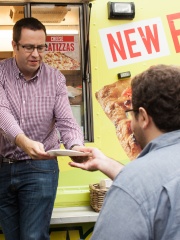 Jared Scott Fogle (; born August 23, 1977) is an American former spokesperson for Subway restaurants and convicted sex offender. After his significant weight loss attributed to eating Subway sandwiches, Fogle was made a spokesperson for the company's advertising campaigns from 2000 to 2015. Born in Indianapolis, Fogle graduated from North Central High School and Indiana University in 1995 and 2000, respectively. Read more on Wikipedia

Since 2007, the English Wikipedia page of Jared Fogle has received more than 9,323,881 page views. His biography is available in 19 different languages on Wikipedia making him the 180th most popular extremist.

Among extremists, Jared Fogle ranks 179 out of 182. Before him are Ajmal Kasab, Wail al-Shehri, Colin Pitchfork, Tommy Robinson, Luka Magnotta, and Hakimullah Mehsud. After him are Omar Mateen and James Holmes.