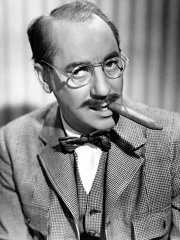 Julius Henry "Groucho" Marx (; October 2, 1890 – August 19, 1977) was an American comedian, actor, writer, stage, film, radio, television star and vaudeville performer. He is generally considered to have been a master of quick wit and one of America's greatest comedians.He made 13 feature films as a team with his siblings the Marx Brothers, of whom he was the third-born. He also had a successful solo career, primarily on radio and television, most notably as the host of the game show You Bet Your Life.His distinctive appearance, carried over from his days in vaudeville, included quirks such as an exaggerated stooped posture, spectacles, cigar, a thick greasepaint mustache, and eyebrows. Read more on Wikipedia

Groucho Marx is most famous for his wit and humor in his movies, such as Duck Soup and A Night at the Opera.