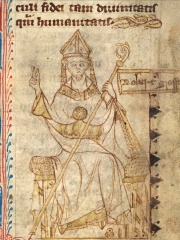 Robert Grosseteste ( GROHS-test; Latin: Robertus Grosseteste; c. 1168 – 8 or 9 October 1253), also known as Robert Greathead or Robert of Lincoln, was an English statesman, scholastic philosopher, theologian, scientist and Bishop of Lincoln. He was born of humble parents in Suffolk (according to the early 14th-century chronicler Nicholas Trevet), but the associations with the village of Stradbroke is a post-medieval tradition. Upon his death, he was revered as a saint in England, but attempts to procure a formal canonisation failed. A. C. Read more on Wikipedia

Robert Grosseteste is most famous for being the first person to use the word "scientist" in English. He was also a philosopher, theologian, and scientist.

Among mathematicians, Robert Grosseteste ranks 133 out of 823. Before him are Menelaus of Alexandria, Andrey Markov, Simplicius of Cilicia, Alexis Clairaut, Michel Rolle, and Liu Hui. After him are Jacques Hadamard, Joseph Liouville, Giambattista della Porta, William Oughtred, Vincenzo Viviani, and Robert Aumann.

Among people born in 1175, Robert Grosseteste ranks 5. Before him are Subutai, Andrew II of Hungary, Otto IV, Holy Roman Emperor, and Agnes of Merania. After him are Raymond of Penyafort, Comtessa de Dia, Yolanda of Flanders, Albert I, Duke of Saxony, Alexander of Hales, Frederick I, Duke of Austria, and Roger III of Sicily. Among people deceased in 1253, Robert Grosseteste ranks 6. Before him are Clare of Assisi, Dōgen, Theobald I of Navarre, Violant of Hungary, and Wenceslaus I of Bohemia. After him are Otto II, Duke of Bavaria, Theodore Komnenos Doukas, Amadeus IV, Count of Savoy, Henry I of Cyprus, Agnes of Assisi, and Vykintas.