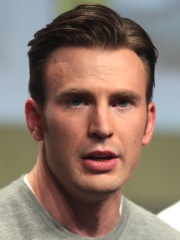 Christopher Robert Evans (born June 13, 1981) is an American actor. He began his career with roles in television series such as Opposite Sex in 2000. Following appearances in several teen films, including 2001's Not Another Teen Movie, he gained attention for his portrayal of Marvel Comics character the Human Torch in Fantastic Four (2005) and Fantastic Four: Rise of the Silver Surfer (2007). Read more on Wikipedia

Among actors, Chris Evans ranks 925 out of 9,996. Before him are Olga Knipper, Til Schweiger, Randolph Scott, Anne Parillaud, Frank Oz, and Yvette Guilbert. After him are Michael Dudikoff, Yuen Siu-tien, Gal Gadot, Thomas Haden Church, María Félix, and Richard Jenkins.