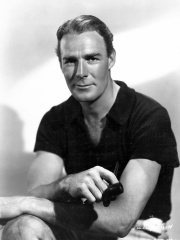 George Randolph Scott (January 23, 1898 – March 2, 1987) was an American film actor whose career spanned the years from 1928 to 1962. As a leading man for all but the first three years of his cinematic career, Scott appeared in a variety of genres, including social dramas, crime dramas, comedies, musicals (albeit in non-singing and non-dancing roles), adventure tales, war films, and a few horror and fantasy films. However, his most enduring image is that of the tall-in-the-saddle Western hero. Read more on Wikipedia

Among actors, Randolph Scott ranks 921 out of 9,996. Before him are Grace Zabriskie, Max Schreck, Stewart Granger, David Graf, Olga Knipper, and Til Schweiger. After him are Anne Parillaud, Frank Oz, Yvette Guilbert, Chris Evans, Michael Dudikoff, and Yuen Siu-tien.