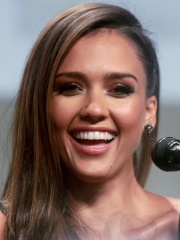 Jessica Marie Alba ( AL-bə; born April 28, 1981) is an American actress and businesswoman. She began her television and movie appearances at age 13 in Camp Nowhere and The Secret World of Alex Mack (1994), and rose to prominence at age 19 as the lead actress of the television series Dark Angel (2000–2002), for which she received a Golden Globe nomination.Her big screen breakthrough came in Honey (2003). She soon established herself as a Hollywood actress, and has starred in numerous box office hits throughout her career, including Fantastic Four (2005), Fantastic Four: Rise of the Silver Surfer (2007), Good Luck Chuck (2007), The Eye (2008), Valentine's Day (2010), Little Fockers (2010), and Mechanic: Resurrection (2016). Read more on Wikipedia