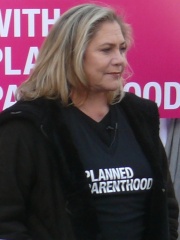 Mary Kathleen Turner (born June 19, 1954) is an American actress and singer. Known for her distinctive voice, Turner has won two Golden Globe Awards and has been nominated for an Academy Award and two Tony Awards.Turner rose to fame during the 1980s, after roles in Body Heat (1981), The Man with Two Brains (1983), Crimes of Passion (1984), Romancing the Stone (1984), and Prizzi's Honor (1985), the latter two earning her a Golden Globe Award for Best Actress – Motion Picture Musical or Comedy, and Peggy Sue Got Married (1986), for which she was nominated for the Academy Award for Best Actress. Read more on Wikipedia

Among actors, Kathleen Turner ranks 914 out of 9,996. Before her are Rod Taylor, Sônia Braga, Lee Remick, Matthew Perry, Jennifer Grey, and Gary Busey. After her are Grace Zabriskie, Max Schreck, Stewart Granger, David Graf, Olga Knipper, and Til Schweiger.