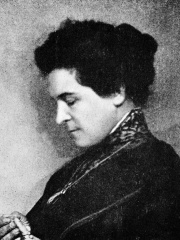 Olga Leonardovna Knipper-Chekhova (Russian: Ольга Леонардовна Книппер-Чехова; 21 September [O.S. 9 September] 1868 – 22 March 1959) was a Russian and Soviet stage actress. She was married to Anton Chekhov.Knipper was among the 39 original members of the Moscow Art Theatre when it was formed by Konstantin Stanislavski in 1898. She played Arkadina in The Seagull (1898), played Elena in the Moscow premiere of Uncle Vanya (1899), and was the first to play Masha in Three Sisters (1901) and Madame Ranevskaya in The Cherry Orchard (1904). Read more on Wikipedia

Among actors, Olga Knipper ranks 919 out of 9,996. Before her are Gary Busey, Kathleen Turner, Grace Zabriskie, Max Schreck, Stewart Granger, and David Graf. After her are Til Schweiger, Randolph Scott, Anne Parillaud, Frank Oz, Yvette Guilbert, and Chris Evans.