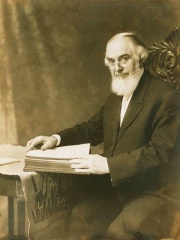 Charles Taze Russell (February 16, 1852 – October 31, 1916), or Pastor Russell, was an American Christian restorationist minister from Pittsburgh, Pennsylvania, and founder of what is now known as the Bible Student movement. He was an early Christian Zionist.In July 1879, Russell began publishing a monthly religious magazine, Zion's Watch Tower and Herald of Christ's Presence. In 1881, he co-founded Zion's Watch Tower Tract Society with William Henry Conley as president; in 1884 the corporation was officially registered, with Russell as president. Read more on Wikipedia

Charles Taze Russell is most famous for being the founder of the Jehovah's Witnesses.

Among religious figures, Charles Taze Russell ranks 633 out of 2,238. Before him are Holofernes, Norbert of Xanten, Margot Frank, Peter Lombard, Epiphanius of Salamis, and Isaac Luria. After him are Pontius Pilate's wife, Isaac of Nineveh, William Tyndale, Je Tsongkhapa, Basilios Bessarion, and Billy Graham.