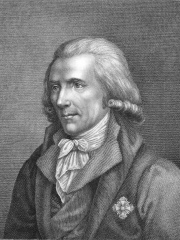 Sir Benjamin Thompson, Count Rumford, FRS (German: Reichsgraf von Rumford; March 26, 1753 – August 21, 1814) was an American-born British physicist and inventor whose challenges to established physical theory were part of the 19th-century revolution in thermodynamics. He served as lieutenant-colonel of the King's American Dragoons, part of the British Loyalist forces, during the American Revolutionary War. After the end of the war he moved to London, where his administrative talents were recognized when he was appointed a full colonel, and in 1784 he received a knighthood from King George III. A prolific designer, Thompson also drew designs for warships. Read more on Wikipedia

Since 2007, the English Wikipedia page of Benjamin Thompson has received more than 238,448 page views. His biography is available in 35 different languages on Wikipedia making him the 160th most popular physicist.