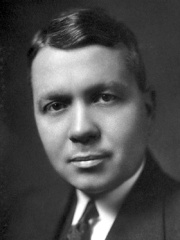 Harold Clayton Urey ( YOOR-ee; April 29, 1893 – January 5, 1981) was an American physical chemist whose pioneering work on isotopes earned him the Nobel Prize in Chemistry in 1934 for the discovery of deuterium. He played a significant role in the development of the atom bomb, as well as contributing to theories on the development of organic life from non-living matter.Born in Walkerton, Indiana, Urey studied thermodynamics under Gilbert N. Lewis at the University of California, Berkeley. After he received his PhD in 1923, he was awarded a fellowship by the American-Scandinavian Foundation to study at the Niels Bohr Institute in Copenhagen. Read more on Wikipedia

Harold Urey was a chemist who won the Nobel Prize in Chemistry in 1934 for his discovery of deuterium, a heavy isotope of hydrogen.