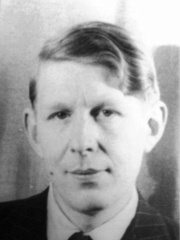 Wystan Hugh Auden (; 21 February 1907 – 29 September 1973) was a British-American poet. Auden's poetry was noted for its stylistic and technical achievement, its engagement with politics, morals, love, and religion, and its variety in tone, form, and content. Some of his best known poems are about love, such as "Funeral Blues"; on political and social themes, such as "September 1, 1939" and "The Shield of Achilles"; on cultural and psychological themes, such as The Age of Anxiety; and on religious themes such as "For the Time Being" and "Horae Canonicae".He was born in York and grew up in and near Birmingham in a professional middle-class family. Read more on Wikipedia

W. H. Auden is most famous for his poetry. He was a British poet who was born in the United States, but moved to England as a child. He is best known for his long poems "September 1, 1939" and "Funeral Blues."