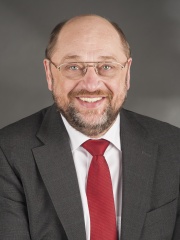 Martin Schulz (born 20 December 1955) is a German politician who was a Member of the European Parliament (MEP) from Germany from 1994 to 2017 and a Member of the Bundestag (MdB) from 2017 to 2021. During his tenure he was Leader of the Progressive Alliance of Socialists and Democrats from 2004 to 2012, President of the European Parliament from 2012 to 2017 and Leader of the Social Democratic Party from 2017 to 2018.In November 2016, Schulz announced he would not seek a third term as President of the European Parliament, but instead would stand in 2017 as the SPD candidate for the German Chancellorship. In January 2017, Sigmar Gabriel announced he would not stand for re-election as party leader and as the SPD candidate for the German Chancellorship, Gabriel recommended Schulz as his replacement.After the elections of September 2017, which resulted in a postwar low for the SPD, Schulz declared the end of the existing Grand coalition under Angela Merkel and explicitly refused to serve in a Merkel government. Read more on Wikipedia

Among politicians, Martin Schulz ranks 3,818 out of 15,577. Before him are Emperor Wu of Liang, Katsura Tarō, Fikret Abdić, Al-Adid, Pentawer, and Wenzel Anton, Prince of Kaunitz-Rietberg. After him are Dalia Grybauskaitė, Empress Jitō, Coluccio Salutati, Jindeok of Silla, Plutarco Elías Calles, and Zuzana Čaputová.