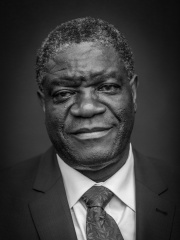 Denis Mukwege (; born 1 March 1955) is a Congolese gynecologist and Pentecostal pastor. He founded and works in Panzi Hospital in Bukavu, where he specializes in the treatment of women who have been raped by armed rebels.In 2018, Mukwege and Iraqi Yazidi human rights activist Nadia Murad were jointly awarded the Nobel Peace Prize for "their efforts to end the use of sexual violence as a weapon of war and armed conflict".Mukwege has treated thousands of women who were victims of rape since the Second Congo War, some of them more than once, performing up to ten operations a day during his 17-hour working days. Read more on Wikipedia

Since 2007, the English Wikipedia page of Denis Mukwege has received more than 645,989 page views. His biography is available in 64 different languages on Wikipedia making him the 91st most popular social activist.

In Democratic Republic of the Congo

Others born in Democratic Republic of the Congo