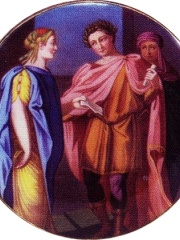 Berenice of Cilicia, also known as Julia Berenice and sometimes spelled Bernice (Greek: Βερενίκη or Βερνίκη, Bereníkē or Berníkē; 28 – after 81), was a Jewish client queen of the Roman Empire during the second half of the 1st century. Berenice was a member of the Herodian Dynasty that ruled the Roman province of Judaea between 39 BCE and 92 CE. She was the daughter of King Herod Agrippa I and Cypros and a sister of King Herod Agrippa II. What little is known about her life and background comes mostly from the early historian Flavius Josephus, who detailed a history of the Jewish people and wrote an account of the Jewish Rebellion of 67. Suetonius, Tacitus, Dio Cassius, Aurelius Victor, and Juvenal also tell about her. Read more on Wikipedia

Berenice was a Greek queen who was married to Ptolemy III. She is most famous for her hair, which she cut off and offered to Aphrodite as a sacrifice in order to save her husband from death.

Page views of Berenices by language

Among politicians, Berenice ranks 2,287 out of 15,577. Before her are Astyanax, William IV, Grand Duke of Luxembourg, Balthasar Charles, Prince of Asturias, Ferdinand, Duke of Parma, Leopold II, Grand Duke of Tuscany, and Zhao Gao. After her are Suleiman ibn Qutulmish, Attalus II Philadelphus, Bounnhang Vorachith, Solomon, King of Hungary, Maximilian III Joseph, Elector of Bavaria, and Theobald I of Navarre.