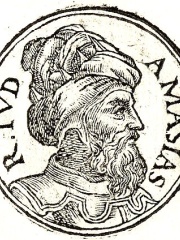 Amaziah of Judah (pronounced , Hebrew: אֲמַצְיָהוּ, ʼĂmaṣyāhū, meaning "the strength of the Lord", "strengthened by Yahweh", or "Yahweh is mighty"; Greek: Αμασίας; Latin: Amasias), was the ninth king of Judah and the son and successor of Joash. His mother was Jehoaddan (2 Kings 14:1–4) and his son was Uzziah (2 Chronicles 26:1). He took the throne at the age of 25, after the assassination of his father, and reigned for 29 years, (2 Kings 14:2 2 Chronicles 25:1), 24 years of which were with the co-regency of his son. Read more on Wikipedia

Amaziah of Judah is most famous for his military victory over the Edomites, and for his death at the hands of conspirators.

Page views of Amaziah of Judahs by language

Among politicians, Amaziah of Judah ranks 2,035 out of 15,577. Before him are Mário Soares, Alexander Helios, Ashurnasirpal II, Henry of Germany, Khorloogiin Choibalsan, and Tamar. After him are Shavkat Mirziyoyev, Albert Casimir, Duke of Teschen, Frederick III of Sicily, Agustín de Iturbide, Mikhail Suslov, and Gianni Agnelli.

Others Deceased in 776 BC