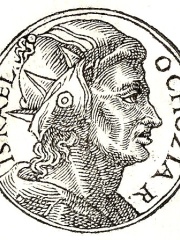 Ahaziah (Hebrew: אֲחַזְיָה ’Ăḥazyā, "Yah has grasped"; also Greek: Ὀχοζίας, Ochozias in the Septuagint and the Douai-Rheims translation) was the eighth king of the northern Kingdom of Israel and the son of Ahab and Jezebel. Like his father, he reigned from Samaria. William F. Albright has dated his reign to 850-849 BC, while E. R. Thiele offers the dates 853-852 BC.The author of the Books of Kings criticized him for following the ways of his father Ahab and his mother Jezebel, and for making Israel sin "in the way of Jeroboam the son of Nebat". Read more on Wikipedia

Ahaziah of Israel is most famous for being the king of Israel when the Assyrians invaded.

Page views of Ahaziah of Israels by language

Among politicians, Ahaziah of Israel ranks 2,056 out of 15,577. Before him are Louis Ferdinand, Prince of Prussia, Adolfo Suárez, Louis I, Duke of Bourbon, Cao Rui, Louise of Savoy, and Jotham of Judah. After him are Álmos, Ptolemy VII Neos Philopator, Zhu De, Ellac, Marcelo Caetano, and Miloš Obrenović.

Others Deceased in 851 BC